Richard Lynn and Tatu Vanhanen, in their famous book cited the results of several studies on IQ of East Asians. As the conclusion made by the scientists had very high implications, a thorough cross check was required. Here I present all the manipulated IQ data on China.

A table was presented by Lynn showing 31 IQ studies on China's population. A claim was made that "there are no samples on Chinese population citing IQ to be less than 95". Here I will present contrary data set on China where average IQ results are less than 90 which as per Lynn's claim do not exist. First lets look at IQ of China which is presented:- 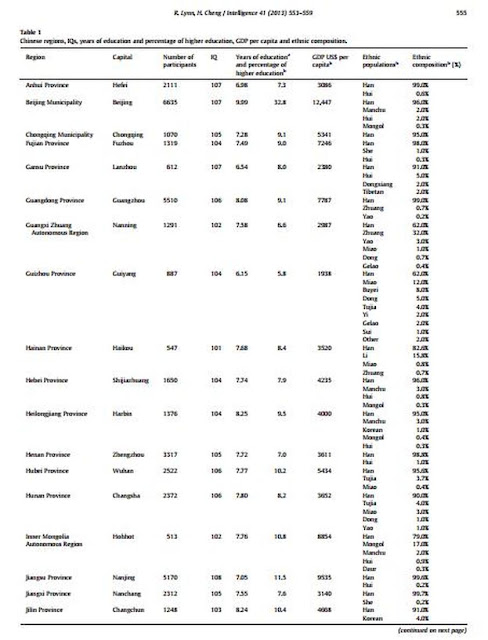 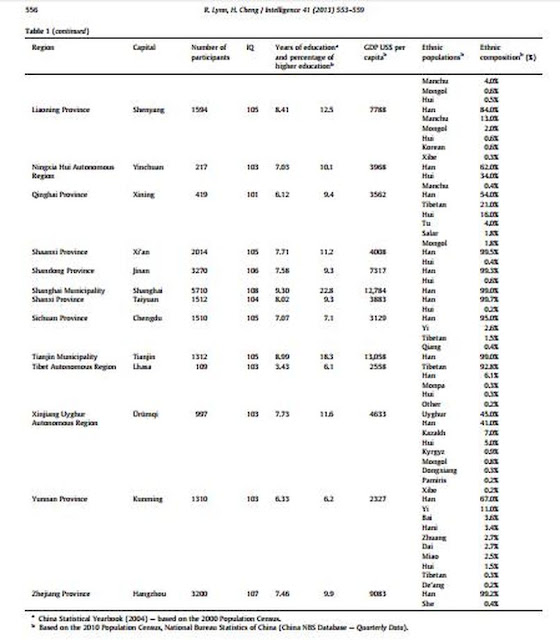 Obviously when the data came into the scientific community, almost everyome was shocked not because of high results, but because of consistency of data. Average IQ in 31 different regions of China was within 10 points.
As it is noticed in IQ testing, average IQ in cities is 15 points higher than rural areas. On top of that, average IQ heavily depends on the people tested. If you were to test factory workers, the average will be 90. University students will show average of 110. So, the scientific community always doubted his work on China.

How did he test Chinese population for IQ ?

A website was created and people were asked to take IQ tests. Unlike African samples where people were downward selected, Chinese IQ was upward sampling of population.

Why do internet users in China have higher IQ than others ? Let's ask a question. What is the internet penetration in China ? It's 45 pc in 2013 and much lower before that. Most probably, the rich ones have access to internet and poor ones do not have. That already selects a population for intelligence. Isn't it.

Lastly, how easy it is to cheat on internet IQ testing. It's quite easy. The results should not have been published as there is no control over test takers over the internet. There are many websites where even people in Latin America have reported 118 average IQs on many people.

It doesn't really make sense to compare this IQ data on China with Thailand where most samples cited are in rural areas. Better will be to compare the data with Bangkok which shows IQ of 103.

Hong, 2001 (Average IQ of 65-82)
Source: http://www.fluoridealert.org/wp-content/uploads/hong-2001.pdf
Average IQ fluctuates between 65 and 82 for china, depending on amount of fluoride in water. Shandong province, china.

The question arises, why did Lynn ignore these samples on China's population. Well, if you go out with a propaganda of proving one nation smarter than another, such result manipulation is a must.

On top, these are the samples that are done in very optimum conditions like low fluoride, etc. and in top notch states of China.

Imagine if I cite these article which are pretty much done on rural population of China and compare it with cities in Europe, I will be able to prove that Europeans have average IQ of 105 and East Asians to be 83. Isn't it. Its just a matter of what you want to show to the world.

Here are the IQ results in European cities:-

Even in South East Asia, India and Iran; you get IQ data to be 103+ in cities. Urban rural gap is only due to cognitive clustering in urban areas.

IQ in Bangkok: 103, Iran(urban): 105, Lucknow: 110, Ahmedabad: 104. There are several reports covering the same which I will discuss later. If the Chinese IQ data is to be compared, comparison has to be done in urban samples on rest of the world.

Now, it has been proven that IQ dataset of China has also been obtained by selective citation just like any other nation. A question arises as to why East Asians do better on PISA which is an unbiased sample covering entire population randomly and unbiased ?

I will talk about the Chinese. I will talk about Korea, Taiwan and Japan later on. Results of Shanghai and other urban areas were published. Chinese government did not allow PISA to publish the results of other provinces. A statement was made by PISA that "we have done PISA sampling in 12 provinces in China and in some of the poorest regions, you get performance close to the OECD average."

Its a very generalized statement which doesn't really mean anything. "Close to the OECD average". It can be 50 points less or 20 points. Unless, PISA results on China which are held back are released nothing can be said about average IQ of China.

However, results of Chinese in South East Asia are well known and they do not show high IQs.

A common argument given is that Malays and other races pull down the scores in Malaysia. It is well known that "other races do not pull down scores" in SEA and even if they do, the gaps are negligible. It is well evident in Singapore school results which I will discuss later to compare East and South Asian IQs.

For verifying whether there is multi modal distribution in PISA scores in Malaysia, I had to calculate the percentile of scores.

Even top 25 percent of Malaysia has an average PISA score corresponding to 98 IQ that is 87 percentile of Malaysian PISA data (520 is 100 IQ and 100 points is 1 standard deviation as discussed before). If I assume that all these are Chinese (that is each and every person of Chinese decent scored better than other races), how does it lead to high IQ and PISA scores among East Asians. This is the best case estimate.
For decent estimate, average IQ of Chinese in Malaysia: 95 IQ, Thailand: 97 IQ (according to PISA reports).
Performance in PISA level 5 and level 6:-
https://www.oecd.org/pisa/keyfin...
Page 31:-
Singapore: 29% students above level 5 and 6.
Malaysia: 0.9% students above level 5 and 6.
In Malaysia (a nation with moderate education system), “at the absolute maximum” 2.5% Chinese students scored in level 5 and level 6. V/S large majority of Chinese students in Singapore (“minimum 6.5% and maximum 38%”).
You can clearly see East Asian PISA score to be same as Czech Republic level once we include Malaysia, Thailand and Singapore; instead of just concentrating on Singapore which is a magnet for China's cognitive elites.

Chinese IQ in SEA (based on PISA) is 98 (best estimate) and 96 (decent estimate).
And PISA is the most reliable large scale study on IQ.

As IQ of China is unknown and there are contrary studies (some showing very high IQs, some very low IQs) and as large scale studies like PISA on China are unavailable to public; it is resonable to assume that China's IQ will be same as Chinese living in SEA as per PISA reports. Chinese in SEA are net importers of high skill immigration from China unlike China which is a net exporter of high skill immigrants. So, at any cost Chinese IQ cannot be more than Chinese in SEA.

Now what about the people especially the bloggers who post IQ of 115 for China. To be frank, most of them are misinformed. IQ of 115 on China is based on an assumption that presently IQ of China is 105 and China will score 115 due to optimum living conditions and first world environment. That's not the case.

Present IQ data available on China shows 95 IQ or 97.5 IQ as per Lynn's work (which is based on his own calculations). 105 is the long term ceiling of IQ in China.

112 is the PISA IQ for Shanghai which is the highest IQ recorded in China where people are living in absolute optimum conditions. As cities generally score 15 points higher, average in China cannot be more than 105. Even the estimate of 105 comes at the cost of assuming optimum living conditions (excluding iodine deficiency, etc., etc.). Present IQ of China as per the data available is 95 as people are not living in optimum conditions. Many of the states have iodine deficiencies, many have underweight children.

But again if I start optimizing IQs for the rest of the world, most nations would score very high. To be frank, Africa and South Asia are the biggest victims of malnourishment and iodine deficiencies.

If the data cited on other nations is un-optimised for iodine deficiencies etc.  etc.; why is he comparing it with an optimized estimate for China ? Of-course if you want to propagate a racial fallacy in the public, such stuffs are required. Even nations in Europe face iodine deficiencies at par or higher than people in China and European IQ can also be adjusted to 104, or I can calculate European IQ by taking highest scoring city in Europe, Amsterdam and subtracting 7 IQ like how he is doing for China which will put Europeans at 103. Isn't it.

And rather Europeans face much higher iodine deficiencies than East Asians and I will show the same with appropriate data later on. On top of that, East Asians do not face any mal-nourishment. In the above text, I showed a few samples on East Asia in mild fluorosis regions that the average IQ in such villages is also in low 80s, let alone 100+. If I show East Asian IQ samples where they are done on malnourished population, the results will be very very low (less than 75 IQ).

So, it is funny if he is optimizing East Asian data to 105 and Europe is kept constant at 97 because it is Europe that faces higher environment contamination due to iodine deficiencies, etc.

And remember, the IQ numbers of India, mid-East that is shown in his book is not optimized unlike East Asia.

The main purpose of him writing his book is to get famous in the public by propagating a racial fallacy that is far from the truth. The scientific community does not acknowledge his books which does seem to be a fiction.

I will further prove that average IQ in Iran in optimum living conditions is also 105, same as people in China (in my coming posts). And will present relevant data.